Kangaroos delayed play at a LPGA event last Thursday and there’re no prizes for guessing which one. The world’s premier female golfers were gathered in Canberra for the LPGA Australian Open when the mob of marsupials interrupted the first round’s play.

It’s been rumoured that the ‘Roos are attracted the lush watered courses during the Australia's capital is typically dry in summer. Apparently local golfers saw nothing strange in the invasion but it certainly turned the heads of some of the international field with Toronto golfer Rebecca LeeBenham tweeting “First time seeing kangaroos on the golf course!” She also posted a photo on her account @RLeeBentham. Further surreal looking pictures and video of the kangaroos bounding across the fairway has become something a viral sports hit.

At least the ‘Roos had the good grace to be quite funny and cutesy.

In the qualifying part of the tournament, it was reported that golfer Daniela Holmqvist was bitten in the leg by a spider, but cut out the poison out using a golf tee and finished her round. 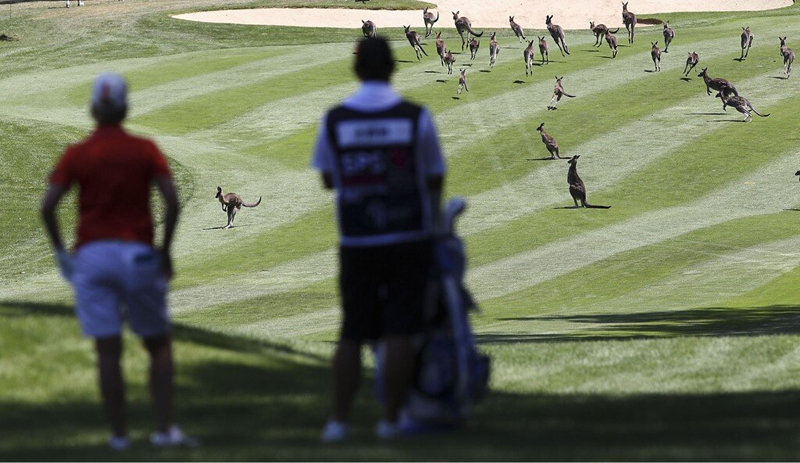 Rory McIlroy took another huge leap towards recapturing the form which made him famous on the golf course – with his lowest score in more than four years – a 9-under 63 while playing with Tiger Woods...

Golfers will be falling over each other to make the cut before this week’s Dubai Desert Classic kicks off as they will earn the opportunity to have a shot at an incredible $2.5million hole-in-one prize...